I know y’all love it when I poke fun at fad diets. And a diet that requires you to test your own blood multiple times a day and has seemingly normal people chowing down on cans of sardines feels like a prime target for some jokes. Maybe I’m just LA homesick, but hear me out… I think the keto diet may be on to something.

This is a vastly complex topic that really tugs at the foundation of all nutritional debates: fats vs carbs. With that in mind, I’m going to frame my ‘argument’ through the endurance athlete lens. And I use the term ‘argument’ lightly because I’m still very much a student on the subject, as are even the leading experts with regards to endurance. My fascination stems from some of the physiological effects of ketosis and endo/exogenous ketones. While there’s a lot more research to be done before any firm conclusions between keto and endurance performance can be reached – the facts we do know blew my mind and I think they’ll do the same for you.

Let’s start by defining the keto diet. This alone creates a lot of confusion amongst people when contemplating low-carb diet options. Things like paleo, Mediterranean, Atkins, Modified Atkins, etc. are NOT keto. The keto diet follows one simple but wildly important rule: you eat (or don’t eat) to remain in a state of ketosis. That’s it.

Ketosis is the body’s natural response to the threat of starvation. Normally the body is fueled by glycogen. The central nervous system especially relies on glycogen, a carbohydrate found in skeletal muscles and the liver, for energy. When this is used up, the body begins to rely on fat for energy. Fat alone has it’s limitations as a fuel source including an inability to easily make it through the blood-brain barrier to fuel the most important part of the CNS. This is where ketones come in. Ketones are basically water soluble fat molecules that are used as an energy source.

Generally speaking, blood ketones of 0.5 mM/dL would mean an individual is in ketosis, but 1.5 to 3.0 mM/dL are ideal to really experience the full range of benefits. Staying in this range is actually rather challenging and one of the biggest reasons this diet doesn’t work for most people. Managing macronutrients is paramount and even the seemingly innocent act of consuming carb-free, clean foods like a whole chicken breast by itself can take you out of ketosis via gluconeogenesis (the metabolic pathway that turns protein into sugar).

So why am I fascinated? I’ll get more into my own experiences with keto and fasting in a Part II to this piece, but for now I just want to share some of the facts that grabbed my attention.

First, the keto diet was not born on some lame late night infomercial. It was created in the 20’s by physicians specializing in neurologic and metabolic medicine to help stop seizures caused by epilepsy. It is still the leading treatment for seizures related to childhood epilepsy. The mechanism at play here has long been misunderstood, but recent studies point to the effects ketones have on genes that control energy metabolism in the brain and thus stabilizing the function of neurons.

It gets way crazier when it comes to the brain and ketones. More and more evidence from animal models and clinical trials suggest ketosis may have therapeutic potential for many neurological disorders, including sleep disorders, ADD, neurodegenerative diseases, bipolar disorder, autism, brain cancer, and more. The believed mechanisms here are complicated, but it all has to do with better energy for neurons, powerful antioxidant protection, and anti-inflammatory factors.

Perhaps the most universal and noticeable positive effects of keto is it’s powerful anti-inflammatory abilities. A common ketone body for instance, ß-hydroxybutyrate, or BHB, inhibits the COX-2 enzyme just like the NSAID we all know: Ibuprofen. The best part? BHB shares none of the same negative side effects as Ibuprofen.

Oxygen and the Navy SEALS

If the baddest dudes on the planet are experimenting with it, you know it’s legit. I remember someone telling me “keto helps me hold my breath twice as long!” and thinking they were full of it. Then I started finding article after article about the Navy SEALS experimenting with keto for diving and the more I looked into it, the more my interest grew.

For added stealth, SEALS use closed-circuit rebreathers vs typical scuba equipment for certain missions. These devices have them breathing almost pure O2 and combined with the water pressure that comes with diving too deep, can cause seizures. The Navy has found ketosis to be a viable solution to this problem.

The need to breathe is linked to the amount of C02 in our blood. The keto diet is the most effective way to lower C02 production and can therefore decrease the body’s need to breathe by up to 30% according to David Ludwig, a nutrition professor at Harvard’s T.H. Chan School of Public Health.

Keep in mind most of the physiological effects of ketosis have not been studied for their impact on athletic performance. So while many of these things individually are known performance boosters, it can’t be said for certain how they would affect performance when factored into the whole physiological and metabolic landscape that ketosis provides without further research. Nevertheless, here are the reasons I suspect ketosis could hold some serious performance secrets:

Mitochondrial Biogenesis and Growth: In the cell, ketones have been shown to increase the formation and development of mitochondria. This thus boosts energy availability and antioxidant activity.

Anti Inflammation: As described in more detail above, the anti-inflammatory effects of ketosis are perhaps the most significant factor in regards to performance. These effects aid in everything from workload capacity to recovery.

Weightloss: Lighter is faster when it comes to endurance sports. Between appetite suppression and the enhanced ability to turn adipose tissue into energy, weightloss is one of the greatest benefits of a keto diet.

Energy Reserves: To put it simply, fat has more energy. 5kCal per gram more, in fact, as compared to 1g of carbs. Once the body is properly fat adapted, skeletal muscles and the central nervous system are no longer dependent on the small amount of glycogen stored within the body for energy. Instead, fat stores within the body become a fuel source, thus giving athletes a much bigger “reserve tank”.

How does a keto diet typically look:

The easiest way to get into a state of ketosis is through fasting. Yep, some good ol’ fashion starvation for a day or two will get those ketones flowing. From there, the common macronutrient breakdown is: +70% fat, 0.5 to 0.9 grams of protein per lb of body weight, and the remainder complex carbs/fiber (leafy greens, vegetables, avocado, etc.)

The most apparent challenge with this kind of diet is managing to get this much fat into meals without increasing protein and carbs too much.

While fascinated, I still don’t believe the keto diet is the best choice for endurance athletes. There are several reasons for this, but one of the biggest is the practicality of such a diet. To put it simply, eating to stay in ketosis while training 20 hours a week and traveling for races is not going to be an easy task. Further, there really is not much understanding of long term effects from this diet.

However, I do believe many of the principles of the diet as well as ketosis as a metabolic and physiological state, should be tools that an athlete has in their toolkit to use during the season. Fasting, exogenous ketones, and strategic fat-adaptation cycles are the primary take-aways for me and I’ll get into all three in Part II in November.

Are you a keto athlete? How’s it working for you? Shoot me a message on Instagram (@TrevorDeRuise) – I’d love to hear some first hand experience on what is and isn’t working out in the real world. 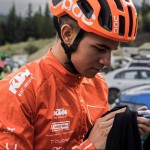 Elite Cycling as a Vegan – Why It’s Bad